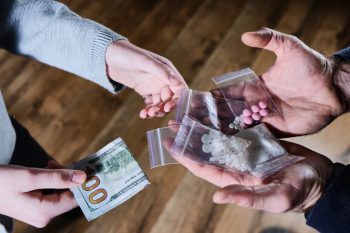 The Monmouth County Prosecutor’s Office just announced the arrests of two Holmdel residents who are now facing charges for a variety of drug offenses. The investigation in question was launched after a man was discovered on the lawn of a local resident while experiencing a heroin overdose.

According to Acting Monmouth County Prosecutor Christopher J. Gramiccioni, 27-year-old Christopher J. Dios and 23-year-old Alyssa D. Morkevich, both of whom are from Holmdel, were arrested by detectives from the Bayshore Narcotics Task Force of the Monmouth County Prosecutor’s Office and Holmdel Police Department in connection with an ongoing investigation into heroin distribution in the area.

The initial incident occurred when a man overdosed on the lawn of a Telegraph Hill Road residence in January. Then, investigators executed a search warrant at 16 Telegraph Hill Road on February 18th, which resulted in the discovery of 50 packets of heroin, hypodermic syringes, and a knife.

The aforementioned drug crimes are extremely serious, particularly those for heroin distribution. For example, under N.J.S.A. 2C:35-5, it is unlawful for any person knowingly or purposely to manufacture, distribute, dispense, or possess with intent to distribute heroin. The degree of these charges is contingent upon the amount of the substance associated with the alleged offense; however, all offenses in violation of this statute entail a prison sentence for those convicted.