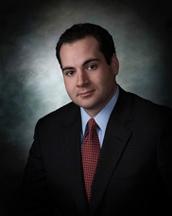 Mr. Uliano graduated from Fairfield University in 2004 with a Bachelor of Arts degree in History and received his Juris Doctor degree from Seton Hall University School of Law in 2007.

Prior to joining the firm, Mr. Uliano served a judicial clerkship with The Honorable Lawrence M. Lawson, the Assignment Judge of the Monmouth Vicinage of the Superior Court of New Jersey from 2007-2008.

Mr. Uliano has served as a panelist at the New Jersey State Bar Association Annual Convention and has been a speaker on numerous occasions. His extensive knowledge and experience have resulted in multiple selections as a presenter/speaker for the Institute of Continuing Legal Education (ICLE), where attorneys are required to obtain yearly education credits to maintain a practicing status in the state of New Jersey.

In 2017, he was honored as the recipient of the 2017 Young Lawyer of the Year Award from the New Jersey State Bar Association. Additionally, he has received the honor of being included in the SuperLawyers list published by Thomson Reuters. As seen in NJ Monthly magazine, Mr. Uliano was nominated to the Rising Star list in 2012, 2015-2018, and to the NJ SuperLawyers list from 2019 – present.

Mr. Uliano is a lifelong Monmouth County resident where he currently resides with his wife and four children.