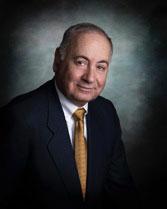 As senior partner, his practice is focused mainly on civil and criminal litigation.

Before joining the Firm, Mr. Uliano’s served as Judicial Law Clerk to the Honorable Thomas L. Yaccarino, 1973-1974 and as an Assistant Monmouth County Prosecutor, from 1976-1979.

Mr. Uliano has extensive trial experience in both the State and Federal Courts. His trial experience includes representation of a variety of personal injury Plaintiffs, as well as numerous police officers, municipalities and municipal employees in defense of violations of Civil Rights Claims. As Plaintiff’s counsel, Mr. Uliano has obtained numerous verdicts and settlements in excess of a million dollars.

In Mr. Uliano’s Criminal practice his zealous and tireless efforts on behalf of his clients make him extremely successful in protecting their interests to the fullest extent of the law.

Mr. Uliano is an “approved attorney” for the Monmouth County Joint Insurance Fund, the Police Legal Defense Fund, both the New Jersey State Police and Fraternal Order of Police (F.O.P.), and the New Jersey Educational Association (N.J.E.A.). As an approved attorney for these associations, he has the opportunity to represent police officers and teachers in disciplinary matters before their local employers and the Office of Administrative Law.

Mr. Uliano has received the highest rating from Martindale-Hubbell, which is bestowed by and awarded to attorneys through a Peer Rating system. He has received the honor of being included in the Super Lawyers list published by Thomson Reuters from 2007-present.

Mr. Uliano has two grown children who have followed in their father’s footsteps and now practice at the Law Firm. Mr. Uliano spends his free time watching sports and enjoying spending time with his eight grandchildren.